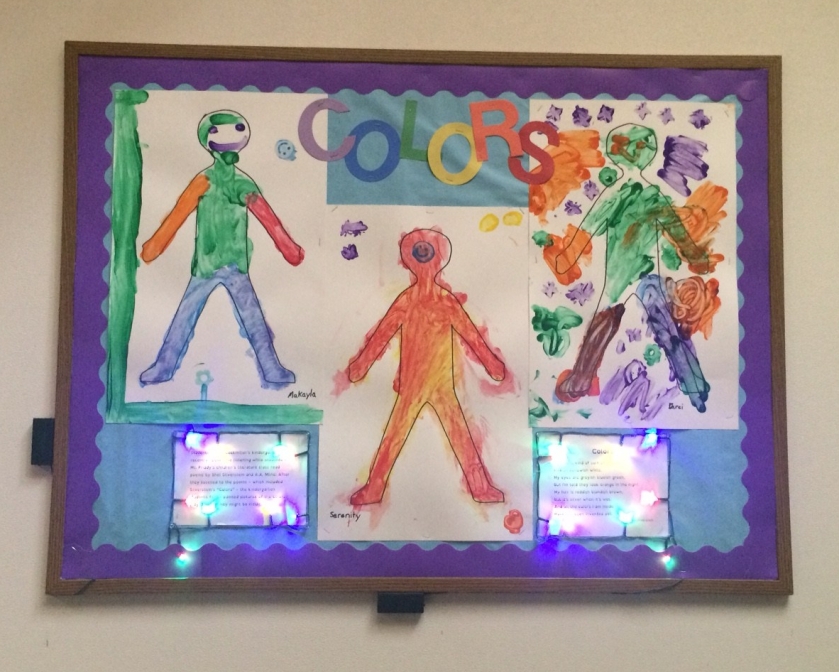 One of the tools I use to make my classroom feel comfortable is light. My room has a skylight in one end and a big window in the other. I augment this natural light with all sorts of soft decorative lighting: floor lamps, table lamps, wall lamps, fairy lights, a lava lamp, and even a light-therapy box I brought in during monsoon season. The kids don’t know this yet, but I’ve ordered a replica of the famous leg lamp from A Christmas Story, which the sophomores just watched as part of a lesson on narrative structure.

I like using lights to call attention to something important — for instance, student work, vocabulary words, or the day’s Common Core objectives.

This board showcases student work in the hall. 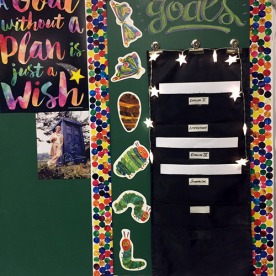 Light up things you want kids to notice.

A few weeks into the school year, I was asked to update some of the long-neglected bulletin boards in the hallway near my classroom.

The image at the very top of this post shows how I used one of them to showcase a kindergarten finger-painting project organized by two of my seniors as part of a story hour they hosted for the little ones. (More on that in a future post.) The “Shining Stars” board above displays a project I’ll share later, in which my sophomores used paint chips to learn about connotation and denotation. Battery-powered LEDs helped dress up both boards.

I basically turn into Clark Griswold with those LEDs, because they’re cheap ($1 to $3 a strand), widely available, and easy to install with staples and double-sided mounting tape. Most of them run on AA batteries. About the only drawback is environmental: Rechargeable AA batteries are slightly larger than the disposable kind, so they won’t fit in the battery compartments on some of the lights. If you’re really concerned about it, check the compartment before you buy; in my experience, lights that run on two batteries usually work fine with rechargeables, while lights that require three batteries usually don’t.

One thought on “Chapter Three: Light It Up”