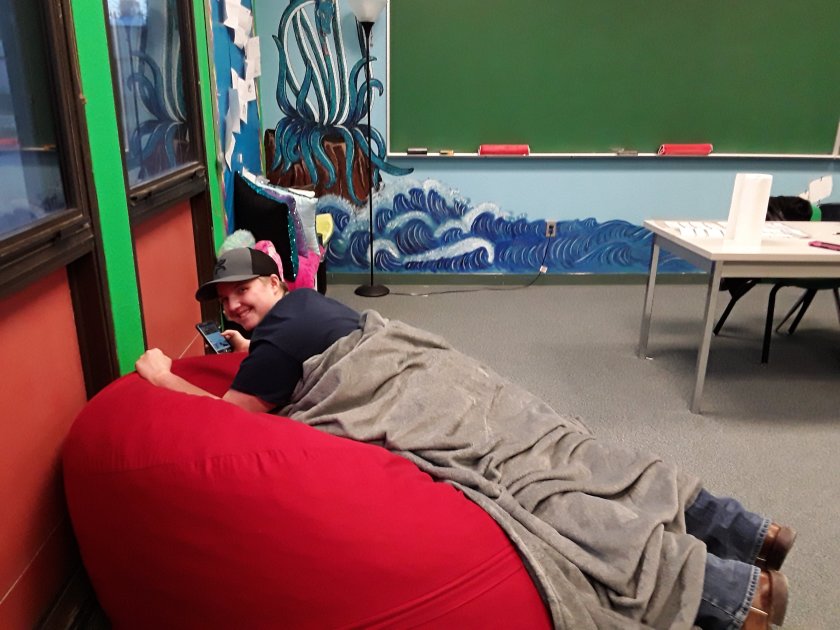 I began my current teaching assignment in October 2017, replacing a teacher who had resigned a couple of weeks earlier. I walked into a classroom with three big tables, a few computer desks, and several chairs in it. The maintenance guy explained that another teacher had commandeered all the traditional desks, but he could bring some out of storage if I wanted them.

I told him that probably wouldn’t be necessary. My teaching style is pretty gonzo, and at my previous school, I’d spent a lot of time gathering the kids around a couple of tables in the center of the room to play games or work on projects that just wouldn’t fit on standard desks.

As the year progressed, I found that my students and I enjoyed sitting on the floor or on top of the tables, so I started accumulating pillows and blankets for the kids to use as seats and bought a case of clipboards for them to use as portable desks.

Second semester, I added a couple of yoga balls. Our special-ed teacher contributed a giant beanbag that she’d found too distracting for her kids. A sale at Target yielded a sturdy storage ottoman. The dollar store turned out to be a great source for mermaid pillows.

Slowly but surely, the collection grew, until my classroom began to feel less like school and more like somebody’s dorm room. Class discussions became less formal and more fun. Potentially intimidating texts started to feel less daunting. And believe it or not, the kids’ behavior didn’t decline at all; if anything, they became more cooperative, because they knew their casual seating arrangements were a privilege — one they could lose if they misbehaved.

I’m not sure how well flexible seating would work with large classes, but for a small group, it’s a great way to create a fun, relaxed atmosphere that makes students feel at home.

Bonus: If your collection is diverse enough, it can serve as a kind of informal learning-styles inventory — your kinesthetic learners will make a beeline for the yoga balls, while your tactile learners will snatch up mermaid pillows and fuzzy blankets to pet.